The Danube is the second largest river in Europe and the only one flowing from West to East in Europe. It`s final destination is the Black Sea but at the enter into the sea, the river forms one of the most amassing places in Europe: The Danube Delta which holds an endemic flora and fauna. The Danube enters Romania through Bazias and travels through for 1075 km before overflowing into the Black Sea. Somewhere on its course, between Salcia and Clafat, the river makes a big turn, a curve that the Antics used to call “the golden horn” because the grain would always grow here like in no other place along this river flow.

The Danube played an important role in the history of the Romanian nation beginning with the long gone days of Roman conquest and before that. On the waves of this river these ancient lands received the influence of Greek culture (that not even the Romans couldn’t banish it during their occupation), Byzantine protection and Christianity, received the Latin language that even today offers the Romanians their latinophone identity. As witnesses of this history lay, even today, remains of the Apollodor`s Bridge over the Danube that helped the Romans to conquest Dacia, the Herculaneum Apeduct are just two of the many examples that we can find near this “golden horn” area as the Antics used to name it.

Here is also the place where we can find Cetate village in the Dolj district. This village is no larger than others, no beautiful than others from the same district but what makes it special is the figure of a man and the heritage he left in this place and in the consciousness of the villagers. This figure is Stefan Barbu Druga born in 1880 in a wealthy family. His father started a cereal business that was going so well that in 1874 he build a 800 m square barn to deposit the cereal production. So the Antics must have said some truth in describing this places as being golden, because the grains here were still prospering 2000 years after. But in the Druga family it was Stefan Barbu who gave the cereal business a big kick and expanded the property, the buildings, the production, the whole family affair that quickly gave identity to this small village, Cetate.

He was a smart business man that gained a lot of respect among people and made his way through the high society also taking part to the political life of the country. He built an economical empire out of cereal export on the Danube and local legends say that he was so rich that when the Russian army came near to Romanian border in the Second World War, he could pay them just so they wouldn’t cross the borders. At Cetate, Druga build up a property with generous outbuildings and a beautiful villa that has a Tuscan atmosphere and a beautiful garden that was inspired from Italian baroque garden and not losing its ravishing beauty even if today the flora is wildly grown. 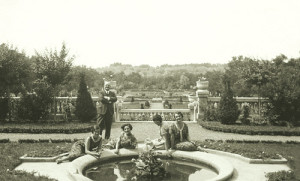 The cereal mill still stands today as an impetuous building and Druga thought of a plan for facilitating the cereal export on the Danube by creating a water flux from the big river that would come near to the mill, so that boats could easily take the grain loads directly from the mill. He also built up Cetate Harbor mainly with the same purpose. But this prosper family and its expansion plans were soon to be stopped by the communist regime who took over Druga`s business and properties.

For almost 60 years the Druga`s estate was taken from the family and slowly abandoned. In 2000 Druga`s heirs regained the property and by 2008 Joana Grevers Foundation, named so after a niece of Barbu Druga, initiated a program that every year is trying to bring back the vitality of the Cetate area through art and culture.

Starting with 2008, every summer in the proximity of the Danube a space of artistic confluence and creation becomes alive. At Cetate artists from different generations and different artistic fields gather here to create freely, inspired by the magnetic beauty of this region in a growing art movement that covers painting, sculpture, drawing, photography, land art and video art. 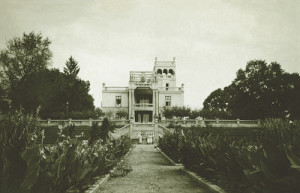 The spirit of the workshops is based on free creation, non-dogmatic just individualistic art movement that in this area bears no creation rules or schedule. Of course, the themes always seem to be related to the Druga estate venues and the Danubian landscapes. The old family premises are becoming a place of discourse and debate, creating the framework to let evolve and promote Romanian talents in fine arts.

The vision of the Joana Grevers Foundation has upon this generous place, on so many levels, the desire, not only to present Romanian contemporary art in a professional way, but also to create the proper environment for art-making and art promoting. This place is thought to be part of the Danubian tourism and to be included on the venues map for travelers on the Danube, thus transforming a former agricultural place into a space of culture and touristic attraction. The Druga estate would function in the future on these parameters. Every building on the property would have an artistic purpose. From the park that would gather numerous sculptures to the grain storage that could easily host a permanent Romanian contemporary art collection. Many of the artworks already exist there and many more are to be made! The buildings that were, back on Druga`s days, the stables, will be transformed into art residences apartments and studios. The smith’s shop has already been transfigured into a beautiful white chapel as a place for meditation and the imposing administrator’s house (which has a south traditional architectural style) could be a bookshop and a cafeteria. Not to mention that the beautiful villa would still be the heart of the estate, remaining the Joana Grevers Foundation base ground.

So, with the help of many social and cultural entities the Barbu Druga estate could become a representative center of Romanian contemporary arts and a very important touristic attraction for European travelers and not only, being easy to reach by river or by land.